In December I hope to read….

Goodreads: Imagine that your husband has two other wives.

You’ve never met the other wives. None of you know each other, and because of this unconventional arrangement, you can see your husband only one day a week. But you love him so much you don’t care. Or at least that’s what you’ve told yourself.

But one day, while you’re doing laundry, you find a scrap of paper in his pocket—an appointment reminder for a woman named Hannah, and you just know it’s another of the wives.

You thought you were fine with your arrangement, but you can’t help yourself: you track her down, and, under false pretenses, you strike up a friendship. Hannah has no idea who you really are. Then, Hannah starts showing up to your coffee dates with telltale bruises, and you realize she’s being abused by her husband. Who, of course, is also your husband. But you’ve never known him to be violent, ever.

Who exactly is your husband, and how far would you go to find the truth? Would you risk your own life?

And who is his mysterious third wife?

The best books are the ones someone ( Kristi )
shares with you.

Goodreads:  A sweet holiday love story about the magic of synchronicity and fate set at a quaint Vermont inn during the week after Christmas.

Emma can’t believe her luck when she finds an open pawn shop on Christmas Eve in Manhattan. She’s there to sell the beautiful bracelet her ex-boyfriend gave her when a familiar looking watch catches her eye. It’s the same engraved watch she gave her college boyfriend, Fletcher, years ago. On a whim, she trades the bracelet for the watch and wonders at the timing.

Practical Emma thinks it’s just a coincidence, but her best friend Bronwyn believes it’s the magic of synchronicity that caused Emma to find the watch. Fletcher was the one that got away, and somehow Emma never quite moved on.

When Bronwyn finds out that Fletcher is in snowy Vermont at a romantic inn for the week, she can’t help but give synchronicity a push. She signs Emma up to help the inn keeper as the children’s activity coordinator. Emma agrees that a week filled with quaint shops and maple syrup would do her good… and maybe Fate really does have a Christmas gift in store for her. That is until she sees Fletcher with his daughter and fiancée.

Suddenly, the fairytale trip seems doomed to fail… much like the innkeeper’s dwindling cashflow. It will take a miracle to save her heart and the inn. And that just might be what Fate has in mind.

Christmas in Vermont is a delightful and charming love story about the magic of second chances during the most festive time of year.

Thank you Kristin of Kritters Ramblings for sharing another book with me.

Goodreads:  From the bestselling author of The Convenient Groom (now a beloved Hallmark Original movie) comes a heartfelt story of family secrets, forgiveness, and unexpected romance.

Following a painful betrayal, Maddy Monroe’s love life is a wreck, and her restaurant career is in shambles. When her grandmother goes missing, she and her estranged sisters converge at the family beach house in Sea Haven, North Carolina. Being with uptight Nora and free-spirited Emma at the place where their family broke apart is a struggle, and undercurrents of jealousy and resentment threaten to pull the sisters under. In the midst of the storm, sparks begin to fly between Maddy and Gram’s maddening neighbor, Connor Murphy.

As the sisters pack up the family belongings, memories of idyllic, slow-paced summers are resurrected. But long-buried secrets also come to light as Maddy discovers that all was not as it appeared that last summer in Sea Haven–nor today in the seemingly perfect lives of her sisters.

As family tensions rise and Connor causes tumult in Maddy’s heart, the sisters must find a way to accept each other for the women they’ve become before the bitterness of the past destroys their hope for a future.

Ope’s Opinion: I am a fan of Denise Hunter and I liked this book, but it was not my favorite.  There was a little too much drama and too many cheating men.  I did like the strong women, who did not settle for less then what they should expect from a relationship with the men in the their lives.

The female relationships are the center of this story, but the romance is definitely there as well.  Everyone has their own set of secrets and reasons why coming to Gram’s house was a good get away.

The ending was what I wanted and would expect from Hunter’s books, but it came on too fast.

This is out today!

Goodreads:  It’s the winter of 1984. Twelve-year old Herbie and his two brothers—Wally and Cockroach—are enjoying the mayhem of winter break when a late Nor’easter blows through New England, trapping their quirky family in the house. The power goes out and playing Space Invaders to AC DC’s Back in Black album is suddenly silenced—forcing them to use their twisted imaginations in beating back the boredom. At a time when the brothers must overcome one fear after the next, they learn that courage is the one character trait that guarantees all others.

This hysterical coming-of-age tale is jam-packed with enough nostalgia to satisfy anyone who grew up in the ‘80s or at least had the good fortune to travel through them.

Thank you Steven for sending this to me!

Goodreads:  Jonathan Sweetwater has been blessed with money, a fulfilling career, great kids and Claire, his smart, gorgeous, sophisticated wife. But there is one thing Jonathan never had: a relationship with his father.

Percival Sweetwater III has been absent from his son’s life since Jonathan was nine years old. A five-term U.S. senator, now dead, Percy was beloved by presidents, his constituents, and women alike, especially the five women who married him after Jonathan’s mother.

Jonathan hasn’t thought about Percy or the hole he left in his life for years. Dedicated to Claire and his family, he’s nothing like his serial monogamist father. But then Jonathan discovers evidence that everything in his marriage may not be as perfect as he thought. Hurt and uncertain what to do, he knows that the only way to move forward is to go back.

On this quest for understanding—about himself, about manhood, about marriage—Jonathan decides to track down his father’s five ex-wives. His journey will take him from cosmopolitan cities to the mile-high mountains to a tropical island—and ultimately back to confront the one thing Jonathan has that his father never did: home.

Ope’s Opinion: I found it interesting that Jonathan tried to “find himself” by searching out his father’s wives.  I think he thought, like father like son, so he wanted to see who his estranged father was.

Thinking from a woman’s perspective, I think it would have been a better choice to just confront his own wife and figure out their relationship, rather then go in search of his father’s life.

The ending was predictable.

Goodreads:  Hearts are lighter and wishes burn a little brighter at Christmas…
Elizabeth Hamilton has been lost. Trapped in a tangle of postpartum depression and grief after the death of her beloved parents, she couldn’t quite see the way back to her husband and their two beautiful kids…until a car accident stole away her memories and changed her life. And when she finally remembered the sound of little Cassie’s laugh, the baby powder smell of Bridger and the feel of her husband’s hand in hers, Elizabeth worried that they’d moved on without her. That she’d missed too much. That perhaps she wasn’t the right mother for her kids or wife for Luke, no matter how much she loved them.

But now, seven years later, Luke finds her in a nearby town and brings Elizabeth back home to the family she loves, just in time for Christmas. And being reunited with Luke and her children is better than anything Elizabeth could have imagined. As they all trim the tree and bake cookies, making new holiday memories, Elizabeth and Luke are drawn ever closer. Can the hurt of the past seven years be healed over the course of one Christmas season and bring the Hamiltons the gift of a new beginning?

Ope’s Opinion: This is a wonderful holiday story.  A great read during a hurried time of year.  I like the way Thayne develops characters, weaves a wonderful story and writes so you can see it.

My only small complaint about the book is, that in the beginning, Thayne tends to repeat facts.  It slows the story down.  Other then that, I would recommend this book.

The ending is everything you expect and want with an opening for the next book. 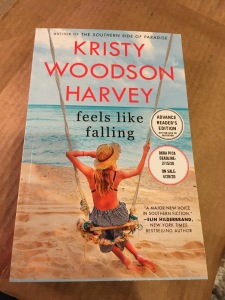 This wonderful book landed!!
Kristy Woodson Harvey is one of
my favorite authors. Her books are
ones I would reread. She is an
amazing story teller.