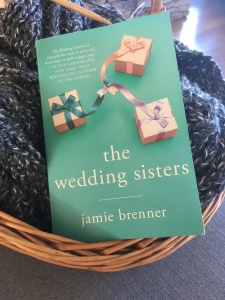 Goodreads:  Meryl Becker is living a mother’s dream. The oldest of her three beautiful daughters, Meg, is engaged to a wonderful man from one of the country’s most prominent families. Of course, Meryl wants to give Meg the perfect wedding. Who wouldn’t? But when her two younger daughters, Amy and Jo, also become engaged to celebrated bachelors, Meryl has to admit that three weddings is more than she and her husband, Hugh, can realistically afford.

The solution? A triple wedding! At first, it’s a tough sell to the girls, and juggling three sets of future in-laws is a logistical nightmare. But when Hugh loses his teaching job, and Meryl’s aging mother suddenly moves in with them, a triple wedding is the only way to get all three sisters down the aisle. When the grand plan becomes public, the onslaught of media attention adds to Meryl’s mounting pressure. Suddenly, appearances are everything – and she will do whatever it takes to keep the wedding on track. As money gets tight, her mother starts acting nutty, and her own thirty year marriage starts to unravel.

In the weeks leading up to the nuptials, secrets are revealed, passions ignite, and surprising revelations show Meryl and her daughters the true meaning of love, marriage and family. Jamie Brenner’s The Wedding Sisters invites readers to the most unpredictable wedding of the year.

Ope’s Opinion: This one is very difficult for me to review.  I absolutely did not like the language in this book – it was over the top and repetitive.  It was hard to relate to – they were whining about having three weddings to pay for and everyone had more then enough money for all of the weddings.  The detailed descriptions of the sex scenes added nothing to the story.

The synopsis and the cover were great!  The sister and parent relationships were enjoyable to read about, but those were not enough for me want to pass this book on.  I was very interested in reading Jamie Brenner’s book The Husband Hour, but now I am concerned it will contain the same language and descriptive sex, so I am rethinking.

2 thoughts on “The Wedding Sisters”