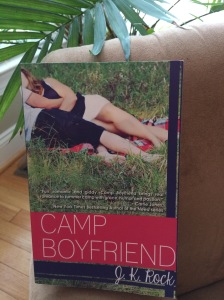 Goodreads:  The summer of her dreams is about to get a reality check.

They said it couldn’t be done, but geeky sophomore Lauren Carlson transformed herself into a popular girl after moving to a new school halfway across the country. Amazing what losing her braces and going out for cheerleading will do. Only trouble is, the popular crowd is wearing on Lauren’s nerves and she can’t wait to return to summer camp where she’s valued for her brain instead of her handsprings. She misses her old friends and most of all, her long time camp-only boyfriend, Seth. This year she intends to upgrade their relationship to year-round status once she’s broken up with her new, jock boyfriend, Matt. He doesn’t even begin to know the real her, a girl fascinated by the night sky who dreams of discovering new planets and galaxies.

But Matt isn’t giving her up without a fight. As he makes his case to stay together, Lauren begins to realize his feelings run deeper than she ever would have guessed. What if the guy she thought she was meant to be with forever isn’t really The One? Returning to Camp Juniper Point was supposed to ground her uprooted life, but she’s more adrift than ever. Everything feels different and soon Lauren’s friends are turning on her and both guys question what she really wants. As summer tensions escalate, Lauren wonders if she’s changed more than she thought. Will her first big discovery be herself?

Ope’s Opinion:  This was a quick, cute read that I think middle school students will enjoy.  Watching Lauren figure out who she is and what she wants is the basis for the story.

The whole book centers around Lauren struggling between friends and two guys she is interested in.  There were times I wanted the story to move faster.  I thought Lauren was indecisive ( but aren’t middle school girls indecisive?? ).  The characters were in high school, but read more like middle school students for me.

The language and sexual content was very appropriate.  I would have given this to my daughters to read when they were in middle school.

Rating:  Three Chairs – I like the book enough to suggest it to a friend or two.