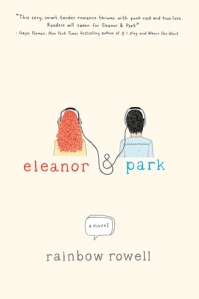 Eleanor… Red hair, wrong clothes. Standing behind him until he turns his head. Lying beside him until he wakes up. Making everyone else seem drabber and flatter and never good enough…Eleanor.

Park… He knows she’ll love a song before he plays it for her. He laughs at her jokes before she ever gets to the punch line. There’s a place on his chest, just below his throat, that makes her want to keep promises…Park.

Set over the course of one school year, this is the story of two star-crossed sixteen-year-olds—smart enough to know that first love almost never lasts, but brave and desperate enough to try.

Ope’s Opinion:  I believe this awesome story could have been told just as effectively without all the foul language.  The story felt real, the characters felt alive.

Having been a new girl at a new school, I could feel Eleanor’s pain in the beginning of the book.  She was a strong young woman.  I really liked the way she was written.  I think most people could relate to her.

It was great to read about a leading male character that isn’t ruggedly handsome.  Park was an average guy.  I liked him.  I liked how he was gentle and tender with Eleanor.

This would have been five chairs in my view, but the language makes me hesitate to recommend it to some of my friends.

Rating: Four Chairs – I like this book so much I know several friends to share it with.