What the Nanny Saw 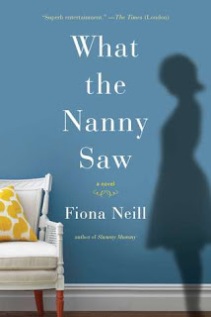 Author: Fiona Neill
Publisher: Penguin Books
Pages: 450
Genre: Women’s Fiction
Source: Penguin Books
Goodreads:    It’s the summer of 2008. For the past decade Nick and Bryony Skinner and their four children have ridden high on the economic boom, but their luck is about to run out. Suddenly, the privileged family finds itself at the center of a financial scandal:

Their Central London house is besieged by the press, Nick disappears, and Bryony and the children become virtual prisoners in their own home. And Ali, their trusted nanny, watches it all. As the babysitter, she brings a unique insider-outsider perspective to the family, seeing far more than even the family itself is capable of. But when a reporter with a personal connection to the story comes asking her for the inside scoop, will Ali remain loyal to the family who never saw her as anything other than the help? Or will she tell her side?

Written with Fiona Neill’s delicious humor and addictive style, What the Nanny Saw is a keenly observed, often comical chronicle of the urban wealthy elite, of parents who are often too busy to notice what is going on under their own noses, of children left to their own devices, and of a young nanny thrown into a role she doesn’t know how to play. It is a morality tale of our time, a tale of betrayal, the corrosive influence of too much money, and why good people sometimes do bad things.

Ope’s Opinion:  If you like books written from a British perspective and set in London, you may like this one.  I found it hard to get into in the beginning.  It did improve.  The core story was good.  Most of the characters were likable.   I found the details overwhelming.    I think the whole story could have been written in a lot less pages.
Rating:  Two Chairs – I may have one friend who  might like this book.

FTC – Disclosure of Material Connection:
I received one copy of this book free of charge from Penguin Books.
I was not required to write a positive review in exchange for receipt
of the book; rather the opinions expressed in this review are my own.