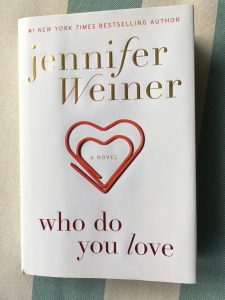 Goodreads:  Rachel Blum and Andy Landis are eight years old when they meet late one night in an ER waiting room. Born with a congenital heart defect, Rachel is a veteran of hospitals, and she’s intrigued by the boy who shows up all alone with a broken arm. He tells her his name. She tells him a story. After Andy’s taken back to the emergency room and Rachel’s sent back to her bed, they think they’ll never see each other again.

Rachel, the beloved, popular, and protected daughter of two doting parents, grows up wanting for nothing in a fancy Florida suburb. Andy grows up poor in Philadelphia with a single mom and a rare talent that will let him become one of the best runners of his generation.

Over the course of three decades, through high school and college, marriages and divorces, from the pinnacles of victory and the heartbreak of defeat, Andy and Rachel will find each other again and again, until they are finally given a chance to decide whether love can surmount difference and distance and if they’ve been running toward each other all along.

With honesty, wit, and clear-eyed observations about men and women, love and fate, and the truth about happy endings, Jennifer Weiner delivers two of her most memorable characters, and a love story you’ll never forget.

Ope’s Opinion: The idea of the story was amazing.   I could feel what the characters were feeling.  The decisions that were made were believable, especially when each person did not have the full story – only their own perspective.

The detailed steamy parts were too explicit for what I like to read.  The whole story could have been complete without those parts being described in detail. The back and forth, together, apart, together, apart, etc. was drug out a bit for me.

The ending was what you would expect, until the next bump in the road!

Goodreads:  From Jennifer Weiner, the #1 New York Times bestselling author of Who Do You Love and In Her Shoes, comes a smart, thoughtful, and timely exploration of two sisters’ lives from the 1950s to the present as they struggle to find their places—and be true to themselves—in a rapidly evolving world. Mrs. Everything is an ambitious, richly textured journey through history—and herstory—as these two sisters navigate a changing America over the course of their lives.

Ope’s Opinion: This is a very realistic story  – too realistic at times  – not an easy read.  To see how women were treated, feelings had to be hidden, and secrets were kept, was hard to read about.

These two sisters are each put in difficult situations that neither felt they could be honest about.  The book explores how that shaped their lives.  The changes in society as they were growing up also influenced them and their decisions.

This story had a lot of deep meaning and difficult subject matter.   It makes you think and hopefully appreciate where women are now.

In June I hope to read….

Goodreads: From Jennifer Weiner, the #1 New York Times bestselling author of Who Do You Love and In Her Shoes, comes a smart, thoughtful, and timely exploration of two sisters’ lives from the 1950s to the present as they struggle to find their places—and be true to themselves—in a rapidly evolving world. Mrs. Everything is an ambitious, richly textured journey through history—and herstory—as these two sisters navigate a changing America over the course of their lives. 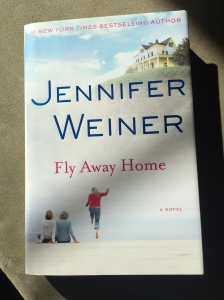 Goodreads:  Sometimes all you can do is fly away home . . .

When Sylvie Serfer met Richard Woodruff in law school, she had wild curls, wide hips, and lots of opinions. Decades later, Sylvie has remade herself as the ideal politician’s wife-her hair dyed and straightened, her hippie-chick wardrobe replaced by tailored knit suits. At fifty-seven, she ruefully acknowledges that her job is staying twenty pounds thinner than she was in her twenties and tending to her husband, the senator.

Lizzie, the Woodruffs’ younger daughter, is at twenty-four a recovering addict, whose mantra HALT (Hungry? Angry? Lonely? Tired?) helps her keep her life under control. Still, trouble always seems to find her. Her older sister, Diana, an emergency room physician, has everything Lizzie failed to achieve-a husband, a young son, the perfect home-and yet she’s trapped in a loveless marriage. With temptation waiting in one of the ER’s exam rooms, she finds herself craving more.

After Richard’s extramarital affair makes headlines, the three women are drawn into the painful glare of the national spotlight. Once the press conference is over, each is forced to reconsider her life, who she is and who she is meant to be.

Written with an irresistible blend of heartbreak and hilarity, Fly Away Home is an unforgettable story of a mother and two daughters who after a lifetime of distance finally learn to find refuge in one another.

Ope’s Opinion:  I am not sure what I was expecting when I started this book.  The synopsis talks about a man cheating on his wife, so the fact that this was a sad, depressing book should not have been a surprise.

Sylvie put her husband above all else – mistake!
Diana’s character is judgemental when she has no right to be – look in the mirror!
Lizzie is flighty and actually the most enjoyable of the three.

There is a very explicit, crude sexual scene in the beginning of the book that just set me off from the beginning.  It was to give you information about Diana.  That information could have been dispensed in a much more subtle way and still gotten the point across.  From there I just couldn’t like her.

The ending was not what I was expecting and not sure it felt satisfying either.