These are my top three books that need to go in your beach bag this summer.

My first pick  for your bag is Kristy Woodson Harvey’s book
The Secrets to Southern Charm. 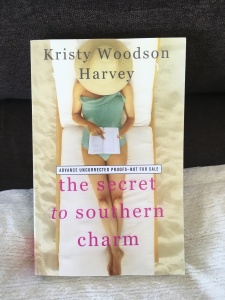 Goodreads:  Leaving fans “practically [begging] for a sequel” (Bookpage), critically acclaimed author Kristy Woodson Harvey returns with the second novel in her beloved Peachtree Bluff series, featuring a trio of sisters and their mother who discover a truth that will change not only the way they see themselves, but also how they fit together as a family.

After finding out her military husband is missing in action, middle sister Sloane’s world crumbles as her worst nightmare comes true. She can barely climb out of bed, much less summon the strength to be the parent her children deserve.

Her mother, Ansley, provides a much-needed respite as she puts her personal life on hold to help Sloane and her grandchildren wade through their new grief-stricken lives. But between caring for her own aging mother, her daughters, and her grandchildren, Ansley’s private worry is that secrets from her past will come to light.

But when Sloane’s sisters, Caroline and Emerson, remind Sloane that no matter what, she promised her husband she would carry on for their young sons, Sloane finds the support and courage she needs to chase her biggest dreams—and face her deepest fears. Taking a cue from her middle daughter, Ansley takes her own leap of faith and realizes that, after all this time, she might finally be able to have it all.

Harvey’s signature warmth and wit make this a charming and poignant story of first loves, missed opportunities, and second chances and proves that she is “the next major voice in Southern fiction” (Elin Hilderbrand, New York Times bestselling author.

My second pick for your bag is Mary Kay Andrew’s book
The High Tide Club. 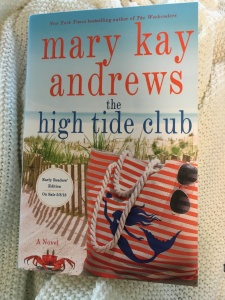 Goodreads:  When ninety-nine-year-old heiress Josephine Bettendorf Warrick summons Brooke Trappnell to Talisa Island, her 20,000 acre remote barrier island home, Brooke is puzzled. Everybody in the South has heard about the eccentric millionaire mistress of Talisa, but Brooke has never met her. Josephine’s cryptic note says she wants to discuss an important legal matter with Brooke, who is an attorney, but Brooke knows that Mrs. Warrick has long been a client of a prestigious Atlanta law firm.

Over a few meetings, the ailing Josephine spins a tale of old friendships, secrets, betrayal and a long-unsolved murder. She tells Brooke she is hiring her for two reasons: to protect her island and legacy from those who would despoil her land, and secondly, to help her make amends with the heirs of the long dead women who were her closest friends, the girls of The High Tide Club—so named because of their youthful skinny dipping escapades—Millie, Ruth and Varina. When Josephine dies with her secrets intact, Brooke is charged with contacting Josephine’s friends’ descendants and bringing them together on Talisa for a reunion of women who’ve actually never met.

The High Tide Club is Mary Kay Andrews at her Queen of the Beach Reads best, a compelling and witty tale of romance thwarted, friendships renewed, justice delivered, and true love found.

My third pick for your bag is Susan Mallery’s
Sisters Like Us.

Goodreads:  The grass is always greener on your sister’s side of the fence…

Divorce left Harper Szymanski with a name no one can spell, a house she can’t afford and a teenage daughter who’s pulling away. With her fledgeling virtual-assistant business, she’s scrambling to maintain her overbearing mother’s ridiculous Susie Homemaker standards and still pay the bills, thanks to clients like Lucas, the annoying playboy cop who claims he hangs around for Harper’s fresh-baked cookies.

Spending half her life in school hasn’t prepared Dr. Stacey Bloom for her most daunting challenge—motherhood. She didn’t inherit the nurturing gene like Harper and is in deep denial that a baby is coming. Worse, her mother will be horrified to learn that Stacey’s husband plans to be a stay-at-home dad…assuming Stacey can first find the courage to tell Mom she’s already six months pregnant.

Separately they may be a mess, but together Harper and Stacey can survive anything—their indomitable mother, overwhelming maternity stores and ex’s weddings. Sisters Like Us is a delightful look at sisters, mothers and daughters in today’s fast-paced world, told with Susan Mallery’s trademark warmth and humor.

Enjoy your summer reading!
I hope these are on your list.