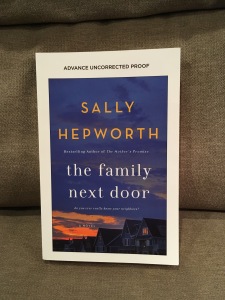 The small suburb of Pleasant Court lives up to its name. It’s the kind of place where everyone knows their neighbours, and children play in the street.

Isabelle Heatherington doesn’t fit into this picture of family paradise. Husbandless and childless, she soon catches the attention of three Pleasant Court mothers.

But Ange, Fran and Essie have their own secrets to hide. Like the reason behind Ange’s compulsion to control every aspect of her life. Or why Fran won’t let her sweet, gentle husband near her new baby. Or why, three years ago, Essie took her daughter to the park – and returned home without her.

As their obsession with their new neighbour grows, the secrets of these three women begin to spread – and they’ll soon find out that when you look at something too closely, you see things you never wanted to see.

Ope’s Opinion:  The chapters are written in each characters voice and perspective.  It was clear who was talking, there were just a lot of people to keep track of in the beginning.  After each persons personality became clear, it was easier to follow the story lines.

It did feel a bit like a soap opera.  They all lived on the same street, they all had drama going on and they all put on happy faces outside of their homes.  Then the lies and secrets started being revealed and the fake faces came off. There were a few twists, but the biggest one was a surprise to me ( a really good one ).  I guessed totally wrong.

The end was good, not wrapped up in a neat bow ( more realistic ).  I liked it.  Could there be more to come for this group of people?

Thank you Goodreads for sending this book to me.

2 thoughts on “The Family Next Door”