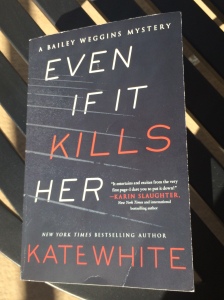 Like many thirty-somethings, Bailey Weggins has a few regrets, some involving her career and others her love life. But running into Jillian Lowe at her book signing, Bailey comes face to face with perhaps her biggest regret to date. For more than ten years, Bailey has felt guilty for not staying in closer communication with Jillian, her college roommate, after Jillian’s family was brutally murdered. Jillian had left their school in the middle of their sophomore year right after the tragedy, leaving Bailey to wonder how her friend’s life turned out.

Bailey is shocked to see Jillian and is even more stunned when her still-gorgeous former roommate approaches her with a case. The man accused of murdering her family has been cleared of the crime through new DNA evidence. With the real killer walking free, Jillian is desperate for Bailey’s help to identify him and finally secure justice for her family. As the two women return to Jillian’s childhood town to investigate, secrets from Jillian’s past begin to surface. And it doesn’t take long before they learn not everyone is happy with their sleuthing—not the local police, not family friends, and certainly not the true killer.

With someone watching their every move, Bailey and Jillian find themselves in grave danger and must decide how much they are willing to risk to finally uncover what happened that terrifying night.

Ope’s Opinion:  Even though this was the seventh book in the Bailey Weggins Mystery series, I could not tell.  This was the first one I read and I did not feel like I was missing any back story.

I really liked how the book jumped right into the story.  There wasn’t a lot of background or unnecessary information before we started right into who died and started trying to figure out who did it.

The book is about trying to figure out who killed Jillian’s family.  The middle drug out for me just a little, but I never wanted to give up reading to find out who killed them.  A long the way, there were a few surprises.  I did guess who the killer was before the end.  It made sense, but it wasn’t who I wanted it to be.  There was someone that I didn’t care for and wanted it to be that person.  It all made sense at the end.