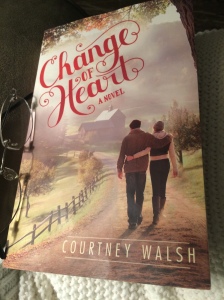 Goodreads:  A Colorado senator’s wife, Evelyn Brandt seems to have it all. But her carefully constructed life comes toppling down when the FBI crashes her society brunch with news that her husband has been arrested for embezzlement, and he’s far from repentant. It turns out this was only the start of his indiscretions―for which he has little regret.

As the weeks following the scandal turn into months, Evelyn withdraws, even shirking her duties with the philanthropic Valentine Volunteers. The inquisitive women of the group are determined not to let Evelyn’s divorce destroy her. They have big plans for her to use her long-forgotten artistic talent to reimagine the city’s iconic lamppost hearts. But doing so will force Evelyn to work closely with Trevor Whitney, her ex-husband’s former best friend. Though she and Trevor used to be close―and he’s been letting her hide in his guesthouse―his gruffness conveys his unease with the situation.

Amid the beauty of Trevor’s farm and the comfort of a paintbrush, Evelyn starts to reclaim the dreams she sacrificed to become the perfect politician’s wife. And as creativity inspires them both, Whit begins to see the girl he fell in love with before his friend―and his own mistakes―stole his chance. Possibilities for a new beginning emerge, but long-kept secrets threaten to ruin everything. After so much time, is a change of heart too much to hope for?

Ope’s Opinion: If you have a church this book should be in it.  This is book two of the series.  I did not realize that when I started and you can’t tell when you are reading it.  I do think the church library should have both books – the other one is titled: Paper Hearts.

This book was not preachy at all. It was actually a really good book to give to someone you want to introduce to God.  He ( God ) was important in each of their lives, but they all made mistakes and were not perfect at all.  It was easy to relate to, no matter your situation.

I will be on the look for more books by Courtney Walsh.