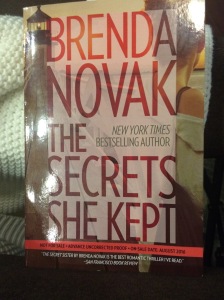 The rich and powerful Josephine Lazarow, matriarch of Fairham Island, is dead. The police say it’s suicide, but Keith, her estranged son, doesn’t believe it.

Keith bears scars—both physical and emotional—from his childhood, but he’s worked hard to overcome the past. After walking away from his mother and her controlling ways five years ago, he’s built a new life in LA. He’s also accumulated a fortune of his own. But as soon as he learns of his mother’s death, he returns to Fairham. He feels he owes it to his grandfather to put the family empire together again—and he’s determined to find his mother’s killer.

Problem is…coming home to Fairham puts him back in contact with Nancy Dellinger, the woman he hurt so badly when he left before. And digging that deep into his mother’s final days and hours entails a very real risk.

Because the person who killed her could be someone he loves…

Ope’s Opinion: The romantic and suspense of the story was well woven together.  The clues for the murderer did not really take me the person who did it.  The romance part was much too explicit for my reading taste.

The characters were interesting and likeable.  The descriptions made it so you could see what she was writing about, but the story itself seemed to bounce all over the place.

The romance ended the way you expected it to.   The murder part wasn’t obvious, but was believable.  This was the second in the series, but you could not tell while reading it.

2 thoughts on “The Secrets She Kept”