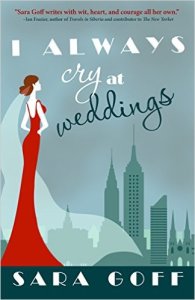 Amazon:  Ava Larson is going to bring all the other brides to tears.

Engaged to a wealthy NYC socialite’s son, Ava is ready to set the city abuzz with her glamorous wedding. At least until she realizes her relationship isn’t what it should be. Then, in a move as daring as a red satin dress, she does the unthinkable–she calls it all off and makes a promise to God that from now on, she’ll save sex for marriage.

She’s convinced the future is hers for the taking, especially when an undercover cop promises a new romance…and an unexpected friendship with the homeless guy under her stoop brightens her days.

But when her carefully balanced life teeters out of control, weddings aren’t the only thing to make her cry. Ava has to figure out what life she really wants to live…and what in the world love really means.

Ope’s Opinion:  When you read the synopsis you know that Ava calls off her wedding.  So I thought that would be the down part of the book and you would see Ava work her way out of a bad relationship into a good place.  Well, it did happen, but it took almost the whole book before the good stuff happened.

I didn’t think Ava could have anymore trouble or make any more bad decisions, yet another came along.  I was starting to think no one person could have this many bad things in their life.

Slowly and I do mean slowly Ava figured out who she was and what she should be doing.  I thought end was very good, it just took a long time to get there.

2 thoughts on “I Always Cry at Weddings”