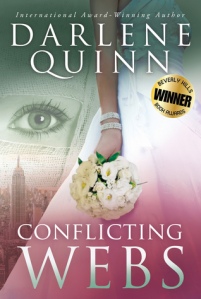 Goodreads:  The Toddman-Taylor saga continues in a new direction, exploring love and loss, career and family, forgiveness and redemption in this stand-alone addition to the gripping Web series. Fast-paced chapters propel unforgettable characters through the turmoil of overlapping and often conflicting commitments.

Wedding bells are set to ring. April Toddman, the darling of the Jordon’s retail dynasty, feels blessed. Her handsome, amiable fiancé, Kyle Clark, is passionate and shares her dreams. No couple could ask for a more promising future. And yet, just days before they are to exchange their marriage vows, their perfect world begins to crumble. Fate steps in and puts April and Kyle to the test. Will they successfully thread their way through the conflicting webs to secure their happiness?

With unfamiliar ground beneath their feet, April and Kyle must confront an unrelenting tsunami of obligations: to other—to their budding careers—and to themselves.

A child without a mother . . . A wedding without a honeymoon . . . A mother without a family . . . Beloved characters old and new weave secrets, mistakes, accidents, and lies into intricate webs of conflict as they strive to protect the generation of tomorrow.

Readers young and old will be held captive by the bold decisions these characters make to take charge of their destinies.

Ope’s Opinion: This book started out a little slow for me.  Once I did get into, I was absorbed in the story right to the end.  Parts of it were very intense.  There were a lot of characters in this book.   Each one was well developed and had a large part in how the story moved forward and ended.  At times I made assumptions on how things were going to turn out and each time I was surprised at the turns the story took.

This is my first book by Darlene Quinn.  I did not feel like I was missing anything since I had not read the previous books.  This book felt complete.

The ending left me wanting more.  Not that it was a bad ending, I just wanted to know more.  I guess that is because it is part of a series.