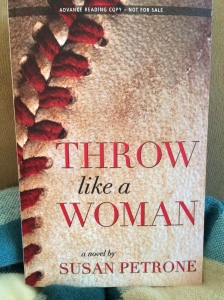 Goodreads:  Forty years old, divorced, with two sons on the verge of adolescence and an ex-husband who considers visitation to be optional, Brenda Haversham isn’t having a whole lot of fun. She’s also no longer qualified for the work she loves, so she’s working in a cubicle instead while trying to make ends meet.

Brenda is short on money, short on connection with her kids, and short on any kind of social life. The only thing Brenda has in abundance is her anger. And that turns out to be her greatest asset.

When she was a kid, Brenda’s father taught her how to throw a good fastball. That wasn’t of much use to a girl, but it is enough to astound onlookers at a “test your speed” pitching cage before a Cleveland Indians game. The more Brenda pictures her ex-husband’s face on the other end, the harder she throws. And when someone tapes her performance and puts it up online, Brenda becomes an Internet sensation – and then more than that.

Soon, the Indians come calling and Brenda finds her life taking a turn in a new direction. She finds herself standing on the mound as the first woman player in Major League history – and dealing with everything that comes with it. The money is great and the endorsement deals are even better. The fury of “traditionalists,” not so much. And the conflicting emotions of her teammates are even harder to manage.

Meanwhile, Brenda’s home life is evolving faster than she can keep up, redefining her role as a mother, a friend, and even a lover.

As the season winds down Brenda will find out if she has what it takes to be a winner – at both baseball and life.

Ope’s Opinion: The combination of baseball and a strong, independent woman drew me into this book.  Although, I like going to baseball games, I don’t enjoy reading all the details of the game.  Each time the baseball part of the story started to drag for me, Susan Petrone would bring in more about Brenda’s personal life, which kept me reading.

The cast of characters ( and there are many ) in this book, reacted to a woman playing baseball as I would expect them to.

Even though there was not an abundance of foul language, I still found it unnecessary.  It did not add to the story.

Overall, the story was a very good one and it kept moving throughout the whole book.

Rating: 3.5 – I like the book enough to suggest it to a friend or two.