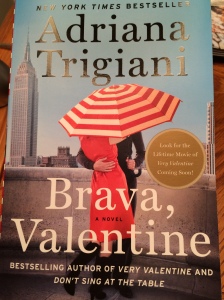 Goodreads:  Adriana Trigiani’s bestselling novels are beloved by millions of readers around the world. From the Big Stone Gap series to Lucia, Lucia, each is a sumptuous treat as Trigiani tells hilarious and romantic stories that we want to return to again and again.

As Brava, Valentine begins, snow falls like glitter over Tuscany at the wedding of her grandmother, Teodora, and longtime love, Dominic. Valentine’s dreams are dashed when Gram announces that Alfred, “the prince,” Valentine’s only brother and nemesis, has been named her partner at Angelini Shoes. Devastated, Valentine falls into the arms of Gianluca, a sexy Tuscan tanner who made his romantic intentions known on the Isle of Capri. Despite their passion for one another and Gianluca’s heartfelt letters, a long-distance relationship seems impossible.

As Valentine turns away from romance and devotes herself to her work, mentor and pattern cutter June Lawton guides her through her power struggle with Alfred, while best friend and confidante Gabriel Biondi moves into 166 Perry Street, transforming her home and point of view. Savvy financier Bret Fitzpatrick, Valentine’s first love and former fiancée who still carries a torch for her, encourages Valentine to exploit her full potential as a designer and a business woman with a plan that will bring her singular creations to the world.

A once-in-a-lifetime business opportunity takes Valentine from the winding streets of Greenwich Village to the sun-kissed cobblestones of Buenos Aires, where she finds a long-buried secret hidden deep within a family scandal. Once unearthed, the truth rocks the Roncallis and Valentine is determined to hold her family together. More so, she longs to create one of her own, but is torn between a past love that nurtured her, and a new one that promises to sustain her.

Ope’s Opinion:  This is the second book in the trilogy of the Roncalli and Angelini family.  The second book has wonderful descriptions so you can see what she is writing, but not as much as the first book.  I feel like the first book gave me all the background to set me up for this book.

Watching Valentine take over at the family company was very interesting.  There were a lot of challenges at the Angelini Shoe Company.  Valentine enjoyed the challenges at work, but wanted more in her life.  Her relationships are explored in this book. Her love interest is not the one I would have picked for her.

I enjoyed Valentines travels in this book.  I wanted to go with her!! – at times I felt like I was with her thanks for Trigiani’s writing.

Rating: Four Chairs – I like this book so much I know several friends to share it with.