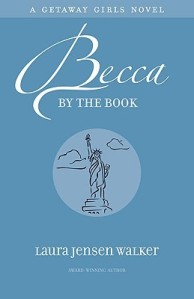 Goodreads:  Sales clerk, barista, telemarketer, sign waver …At twenty-five, free-spirited Becca Daniels is still trying to figure out what she wants to be when she grows up.What Becca doesn’t want to be is bored. She craves the rush of a new experience, whether it’s an extreme sport, a shocking hair color, or a new guy. That’s why she quit her bookstore job, used her last bit of credit to go skydiving, and broke her leg. And that’s why, grounded and grumpy, Becca bristles when teased by friends for being commitment-phobic. In response, Becca issues an outrageous wager—that she can sustain a three-month or twenty-five date relationship with the next guy who asks her out. When the guy turns out to be ‘churchy’ Ben—definitely not Becca’s type—she gamely embarks on a hilarious series of dates that plunge her purple-haired, free-speaking, commitment-phobic self into the alien world of church potlucks and prayer meetings. This irrepressible Getaway Girl will have you cheering her on as she ‘suffers’ through her dates, gains perspective on her life’s purpose, and ultimately begins her greatest adventure of all.

Ope’s Opinion:  This is book three ( final book ) in the Getaway Girls series.  I think Becca’s attitude for life in general is my favorite.  She just wants to do whatever comes to mind at the moment.  She doesn’t have to fit into the traditional form of marriage, husband and kids.

I like seeing faith, church and Christianity from someone who is not sure it all works for her.  I like that she went places and did things with Ben that she wasn’t excited about. I think it is good to learn about yourself by trying different things.

The ending was not what I thought it was going to be.  It was kind of nice to see a different ending then you usually get at the end of a chick lit series.

Rating: Three Chairs – I like the book enough to suggest it to a friend or two.