All of these came from my daughter Kristin of Kritters Ramblings.

The first one is:  Girl Underwater 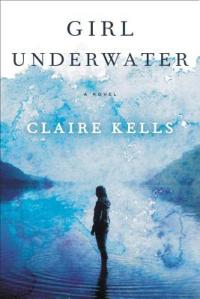 Goodreads:  An adventurous debut novel that cross cuts between a competitive college swimmer’s harrowing days in the Rocky Mountains after a major airline disaster and her recovery supported by the two men who love her—only one of whom knows what really happened in the wilderness.

Nineteen-year-old Avery Delacorte loves the water. Growing up in Brookline, Massachusetts, she took swim lessons at her community pool and captained the local team; in high school, she raced across bays and sprawling North American lakes. Now a sophomore on her university’s nationally ranked team, she struggles under the weight of new expectations but life is otherwise pretty good. Perfect, really.

That all changes when Avery’s red-eye home for Thanksgiving makes a ditch landing in a mountain lake in the Colorado Rockies. She is one of only five survivors, which includes three little boys and Colin Shea, who happens to be her teammate. Colin is also the only person in Avery’s college life who challenged her to swim her own events, to be her own person—something she refused to do. Instead she’s avoided him since the first day of freshman year. But now, faced with sub-zero temperatures, minimal supplies, and the dangers of a forbidding nowhere, Avery and Colin must rely on each other in ways they never could’ve imagined.

In the wilderness, the concept of survival is clear-cut. Simple. In the real world, it’s anything but.

The second one:  The Survivor’s Guide to Family Happiness

Goodreads:  Three women, three lives, and one chance to become a family…whether they want to or not.

Newly orphaned, recently divorced, and semiadrift, Nina Popkin is on a search for her birth mother. She’s spent her life looking into strangers’ faces, fantasizing they’re related to her, and now, at thirty-five, she’s ready for answers.

Meanwhile, the last thing Lindy McIntyre wants is someone like Nina bursting into her life, announcing that they’re sisters and campaigning to track down their mother. She’s too busy with her successful salon, three children, beautiful home, and…oh yes, some pesky little anxiety attacks.

But Nina is determined to reassemble her birth family. Her search turns up Phoebe Mullen, a guarded, hard-talking woman convinced she has nothing to offer. Gradually sharing stories and secrets, the three women make for a messy, unpredictable family that looks nothing like Nina pictured…but may be exactly what she needs. Nina’s moving, ridiculous, tragic, and transcendent journey becomes a love story proving that real family has nothing to do with DNA.

The third one is:  Just Fine with Caroline 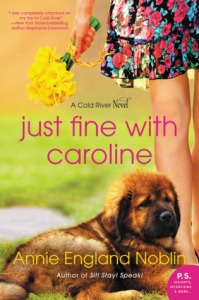 Caroline O’Connor never dreamed she’d be back home in Cold River, Missouri, the Ozark Mountain town where everyone is ‘up your business.’…they mean well as they drive you crazy. She thought she’d left town for good, but now she’s back, helping to care for her New York born mother—struck with Alzheimer’s, and prone to saying and doing anything—and her father, the beloved local doctor frustrated he can’t cure his own wife.

As for Caroline, she’s doing ‘just fine’ coping with her parents, her brazen cousin Ava Dawn’s marital disasters, her mostly-deaf dog…and with Noah Cranwell, far-flung relative of a local family mostly infamous for running moonshine, an ex-veteran who’s come to Cold River with troubles of his own.

Caroline believes she knows everything about Cold River and the people who live in its hills and hollers … but sometimes life’s greatest surprises happen closest to home.

My daughter picks the best books for me to read!!