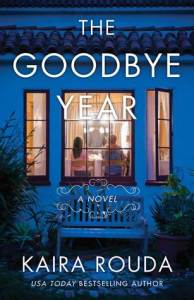 Goodreads:  Melanie, a perfectionist mom who views the approaching end of parenting as a type of death, can t believe she has only one more year to live vicariously through her slacker senior son, Dane. Gorgeous mom Sarah has just begun to realize that her only daughter, Ashley, has been serving as a stand-in for her traveling husband, and the thought of her daughter leaving for college is cracking the carefully cultivated facade of her life. Will and his wife are fine as long as he follows the instructions on the family calendar and is sure to keep secret his whole other life with Lauren, the woman he turns to for fun (and who also happens to have a daughter in the senior class).
Told from the points of view of both the parents and the kids, The Goodbye Year explores high school peer pressure, what it s like for young people to face the unknown of life after high school, and how a transition that should be the beginning of a couple s second act together empty nesting is often actually the end.”

I am excited to read another Kaira Rouda book.  I really liked In the MIrror, so I am expecting a good read again! 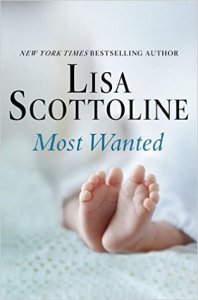 Goodreads: Christine Nilsson and her husband, Marcus, are desperate for a baby. Unable to conceive, they find themselves facing a difficult choice they had never anticipated. After many appointments with specialists, endless research, and countless conversations, they make the decision to use a donor.

Two months pass and Christine is happily pregnant. but one day, she is shocked to see a young blond man on the TV news being arrested for a series of brutal murders-and the blond man bears an undeniable and uncanny resemblance to her donor.

Delving deeper to uncover the truth, Christine must confront a terrifying reality and face her worst fears. Riveting and fast-pace, with the depth of emotionality that has garnered Lisa Scottoline legions of fans, Most Wanted poses an ethical and moral dilemma: What would you do if the biological father of your unborn child was a killer?

Lisa Scottoline – what can I say – she does not disappoint.
And the cover is resistible too!

From Allison Morgan and Berkley

Goodreads:  From the author of The Someday Jar comes a witty and warm novel about a matchmaker who’s an expert at matters of the heart—except when it comes to her own…

Matchmaker Bree Caxton has a 98% success rate, a book about to hit the stands, and an amazing boyfriend. Until, that is, he gets cold feet about their future and runs from their relationship.

Afraid no one will buy a book on love from a woman whose love life is a mess, Bree begs her one matchmaking failure, Nixon Voss, to pose as her boyfriend. But when they become a hit with readers, they must carry on their charade just a little longer. Fortunately, they’re both having fun…

But then Bree’s ex decides he wants her back and a newspaper presents a challenge that could expose the truth about her rocky love life. Now she must find the courage to embrace what is, or risk losing something much bigger than her reputation: her heart…

This a new author to me.  I thought it sounded like a great read.
Can’t wait!

Protecting the streets of Haven Point isn’t just a job for police officer Wyn Bailey, it’s a family tradition. But lately she’s found herself wanting more, especially from her boss—and overprotective brother’s best friend—sexy chief of police, Cade Emmett. The only problem is getting Cade to view her as more than just a little sister.

Cade’s hands-off approach with Wyn isn’t from lack of attraction. But his complicated past has forced him to conceal his desire. When Wyn is harmed in the line of duty, Cade realizes the depth of his feelings, but can he let his guard down long enough to embrace the love he secretly craves?

Another Haven Point novel – it will be fun to be back there!

All this and BEA books to – it is going to be a fun summer of reading!