These are my suggestions if you want to
share the love of books for your mystery readers.

Goodreads:  New York Times bestselling and Edgar Award winning author Lisa Scottoline is loved by millions of readers for her suspenseful novels about family and justice. Scottoline delivers once again with Keep Quiet, an emotionally gripping and complex story about one man’s split-second decision to protect his son – and the devastating consequences that follow.Jake Buckman’s relationship with his sixteen-year-old son Ryan is not an easy one, so at the urging of his loving wife, Pam, Jake goes alone to pick up Ryan at their suburban movie theater.  On the way home, Ryan asks to drive on a deserted road, and Jake sees it as a chance to make a connection. However, what starts as a father-son bonding opportunity instantly turns into a nightmare. Tragedy strikes, and with Ryan’s entire future hanging in the balance, Jake is forced to make a split-second decision that plunges them both into a world of guilt and lies. Without ever meaning to, Jake and Ryan find themselves living under the crushing weight of their secret, which threatens to tear their family to shreds and ruin them all. Powerful and dramatic, Keep Quiet will have readers and book clubs debating what it means to be a parent and how far you can, and should, go to protect those you love.

Ope’s Opinion:  This one took my breath away and kept me reading into the night.

Love You More
By: Lisa Gardner

Goodreads:  WHO DO YOU LOVE?

One question, a split-second decision, and Brian Darby lies dead on the kitchen floor. His wife, state police trooper Tessa Leoni, claims to have shot him in self-defense, and bears the bruises to back up her tale. For veteran detective D. D. Warren it should be an open-and-shut case. But where is their six-year-old daughter?

As the homicide investigation ratchets into a frantic statewide search for a missing child, D. D. Warren must partner with former lover Bobby Dodge to break through the blue wall of police brotherhood, seeking to understand the inner workings of a trooper’s mind while also unearthing family secrets. Would a trained police officer truly shoot her own husband? And would a mother harm her own child?

For Tessa Leoni, the worst has not yet happened. She is walking a tightrope, with nowhere to turn, no one to trust, as the clock ticks down to a terrifying deadline. She has one goal in sight, and she will use every ounce of her training, every trick at her disposal, to do what must be done. No sacrifice is too great, no action unthinkable. A mother knows who she loves. And all others will be made to pay.

Ope’s Opinion:  If you love unexpected twists – this one if for you!

After I’m Gone
By: Laura Lippman 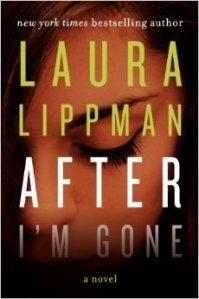 Goodreads:  The acclaimed New York Times bestselling author of The Most Dangerous Thing, I’d Know You Anywhere, and What the Dead Knowreturns with an addictive story that explores how one man’s disappearance echoes through the lives of the five women he left behind—his wife, his daughters, and his mistress

Dead is dead. Missing is gone.

When Felix Brewer meets nineteen-year-old Bernadette “Bambi” Gottschalk at a Valentine’s Day dance in 1959, he charms her with wild promises, some of which he actually keeps. Thanks to his lucrative—if not all legal—businesses, she and their three little girls live in luxury. But on the Fourth of July in 1976, Bambi’s comfortable world implodes when Felix, facing prison, vanishes.

Though Bambi has no idea where her husband—or his money—might be, she suspects one woman does: his devoted young mistress, Julie. When Julie disappears ten years to the day after Felix went on the lam, everyone assumes she’s left to join her old lover—until her remains are discovered in a secluded park.

Now, twenty-six years later, Roberto “Sandy” Sanchez, a retired Baltimore detective working cold cases for some extra cash, is investigating her murder. What he discovers is a tangled web of bitterness, jealousy, resentment, greed, and longing stretching over five decades. And at its center is the man who, though long gone, has never been forgotten by the five women who loved him: the enigmatic Felix Brewer.

Felix Brewer left five women behind. Now there are four. Does at least one of them know the truth?

Ope’s Opinion: This one is full of family secrets.

4 thoughts on “Books for Mystery Readers”