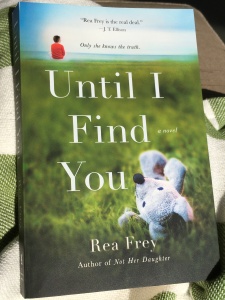 Goodreads:  “In Until I Find You, celebrated author Rea Frey brings you her most explosive, emotional, taut domestic drama yet about the powerful bond between mothers and children…and how far one woman will go to bring her son home.

“”Frey is a rising star in the suspense scene”” – Booklist

Since Rebecca Gray was diagnosed with a degenerative eye disease, everything in her life consists of numbers. Each day her world grows a little darker and each step becomes a little more dangerous.

Following days of feeling like someone’s watching her, Bec awakes at home to the cries of her son in his nursery. When it’s clear he’s not going to settle, Bec goes to check on him.
She reaches in. Picks him up.
But he’s not her son.
And no one believes her.

One woman’s desperate search for her son . . .

In a world where seeing is believing, Bec must rely on her own conviction and a mother’s instinct to uncover the truth about what happened to her baby and bring him home for good.

Ope’s Opinion:   Rea Frey has done it again!  She wrote a book that has you looking over Bec’s shoulder from the first page – Yes first page!  The writing is so good you can feel Bec’s fear.

The part that let me down just a bit was Bec’s constant refusal of help.  There were people in her life that were willing to help and she wouldn’t accept the help.  She also didn’t act rational some times, then wondered why people didn’t believe her.

The ending was a little off for me. I don’t know what I was expecting, but this wasn’t it.  The epilogue felt like the end of chick lit novel, not a thriller novel.

1 thought on “Until I Find You”