These are my suggestions if you want to
share the love of books for women’s fiction readers.

Goodreads:  When a young mother dies under mysterious circumstances, those she leaves behind begin looking for answers in the past—and find a long-buried secret they could have never imagined.
Thirty-six-year-old Grace McAllister never longed for children. But when she meets Victor Hansen, a handsome, charismatic divorced restaurateur who is father to Max and Ava, Grace decides that, for the right man, she could learn to be an excellent part-time stepmom. After all, the kids live with their mother, Kelli. How hard could it be?

At thirteen, Ava Hansen is mature beyond her years. Since her parents’ divorce, she has been the one taking care of her emotionally unstable mother and her little brother—she pays the bills, does the laundry, and never complains because she loves her mama more than anyone. And while her father’s new girlfriend is nice enough, Ava still holds out hope that her parents will get back together and that they’ll be a family again.

But only days after Victor and Grace get engaged, Kelli dies suddenly under mysterious circumstances—and soon, Grace and Ava discover there was much more to Kelli’s life than either ever knew.

Narrated by Grace and Ava in the present with flashbacks into Kelli’s troubled past, Heart Like Mine is a poignant and hopeful portrait about womanhood, love, and the challenges of family life.

Ope’s Opinion:  This is a fast read.

Goodreads:  From the author of Things Remembered and The Year Everything Changed comes a moving novel about love that lasts forever

Sixteen years ago Carly Hargrove made a decision that would irrevocably alter her life. With little comprehension of the life-long consequences of her actions, she trades her own future happiness to protect the man she’s loved since kindergarten, David Montgomery.

With an ocean separating them, Carly builds a life for herself without David. She’s the mother of three, lives in a beautiful house, and is married to a man who comes home every night—even if most of those nights he drinks too much. What more could she want?

Her answer arrives on a cold fall day when David shows up at her door. In town for his father’s funeral, he has come to see Carly one last time, hoping to rid himself of the anger that still consumes him.

Instead, he is drawn into a web of secrets that rekindles the fierce need he once felt to protect Carly. He becomes caught up in her life in a way he never could have imagined—a way that will bind him to her forever.

The Daughter She Used to Be
By: Rosalind Noonan 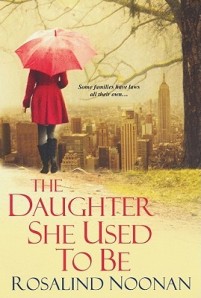 Goodreads: In this emotionally charged and riveting novel from the author of One September Morning and In a Heartbeat, one woman is torn between loyalty to her family’s ways and to her most profound convictions. . .

The daughter of a career cop, Bernadette Sullivan grew up with blue uniforms hanging in the laundry room and cops laughing around the dinner table. Her brother joined New York’s finest, her sisters married cops, and Bernie is an assistant District Attorney. Collaring criminals, putting them awayit’s what they do. And though lately Bernie feels a growing desire for a family of her own, she’s never questioned her choices. Then a shooter targets a local coffee shop, and tragedy strikes the Sullivan family.

Anger follows griefand Bernie realizes that her father’s idea of retribution is very different from her own. All her life, she’s inhabited a clear-cut world of right and wrong, of morality and corruption. As Bernie struggles to protect the people she loves, she must also decide what it means to see justice served. And in her darkest hour, she will find out just what it means to be her father’s daughter.